God knows how I got away with it, but I remember very clearly staying up to watch the horror double bills that played on BBC 2 on Saturday nights. Maybe my parents were unusually liberal; maybe I watched from the stairs… but anyway, I was just eleven years old in 1980 when I first watched The Ghoul. The BBC would show a black-and-white film before a more lurid, colour broadcast. This particular week, unless I’m mistaken, included the magnificent Night of the Demon before this Peter Cushing feature. I went to bed as scared as I’ve ever been. The Ghoul is definitely my favourite of all the movies of its ilk that appeared from Hammer and Amicus, though this was created by Tyburn Film Productions, and was one of only three horror films made during its lifespan. Cushing is excellent as the tortured father to the thing in the attic. John Hurt plays a wonderfully creepy gardener. Very violent. Very red. Those sandals… that dog bowl… A film that really got under my skin.

Volume 5 of The Best Horror of the Year, edited by Ellen Datlow and published by Skyhorse, will contain my short story The Pike. The book will be available from the beginning of September. You can pre-order it here in the UK or here for US customers.

I’d always wanted a cat and when I bought a flat in Stamford Hill in 1997 it felt as though the time was right. It was a Maine Coon or nothing for me. I have always admired them, and was enchanted by their inquisitive nature, the odd sounds they produce and the sheer size of them. That and the tendency they have to follow you around. So I did some research and found a breeder in West Croydon who had a bunch of kittens for sale. I took a trip out there and was greeted by four little Maine Coons from the same litter, six weeks old. Two immediately caught my attention. The first one was a ginger tom, and it was flying around, a wild look in its eyes, as if it had a propeller in its backside. The other was a smoky grey female, calmly observing this lesser mortal with an almost amused air. I plumped for the grey, and took her home in a box. 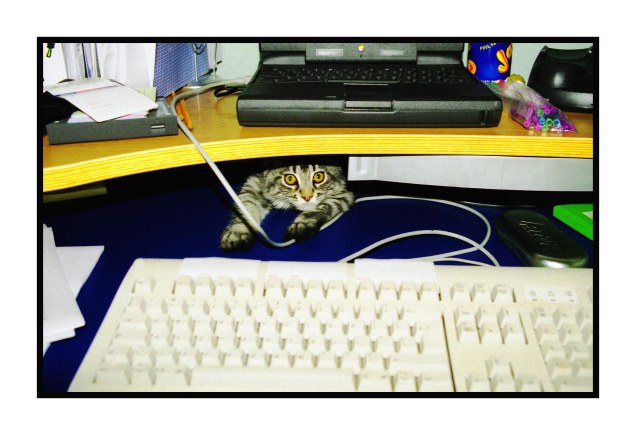 I called her Redknapp, after my favourite footballer at the time, but since his retirement (and realising anyway that it was a pretty dumb thing to do) we now call her Reddie. When she was a kitten she developed a number of lifelong habits which include licking the edges of glossy magazines or paperback books and chewing plastic bags.

I feed her dry food, mainly Science Plan (she has always turned her nose up at human food but loves tuna and chopped-up tiger prawns). She’s a bit timid with strangers, and it’s taken her years to get used to our boys (when our first son was born she hid under the bed and did not emerge for two entire days) but when everyone’s out at school or in bed at night, she will come and find me and curl up next to me while I write, or while I unwind in front of the box.

She’s getting on a bit now (13 is pretty old for Maine Coons) and last year she was very ill for a spell. The vet discovered that her kidneys were failing so now she takes a tablet every day. She’s been fine since, but despite retaining a healthy appetite she’s getting a little boney and ragged around the edges (but that didn’t stop her from escaping yesterday and spending the whole night outdoors). She sleeps a lot, but when she wakes up we have a little chat (Maine Coons love to chat) and part of me suspects she’s asking me how the writing’s going and why the hell are you talking to a cat when you should be getting back to it, numb-nuts?

So excuse the writer-has-cat cliché, but I just wanted to show her off. And why not? She’s prettier than all of you…

So having polished off the ‘mainstream’ movies, I might as well share with you my go-to films when I want to get my creep on… 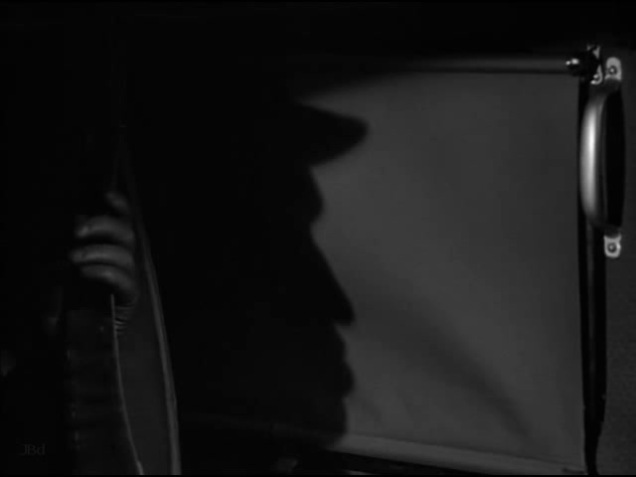 Is this a horror film? Probably not in the conventional sense. But it was for me when I first watched it, aged around seven or eight. It was part of a series of fourteen films made for both Fox and Universal, starring Basil Rathbone as Sherlock Holmes. They were very short, sometimes hovering around the hour mark (as does this one), anachronistic (but for the first two Fox-made films, set in Victorian era, the later films were invariably set during the wartime years and some contain associated plots) but they were gripping and atmospheric.

The Pearl of Death is an adaptation of Arthur Conan Doyle’s story The Six Napoleons. At its heart is the ‘evil’ pearl of the Borgias, a “miracle of horror” as Holmes describes it. The pearl is stolen by Giles Conover (Miles Mander) who manages to hide it before he is apprehended. The rest of the film deals with Holmes and his companion Dr Watson (Nigel Bruce) as they attempt to track down the pearl. But someone else is on the trail too: Giles Conover’s henchman, The Hoxton Creeper (“the chest of a buffalo… the arms of a gorilla”), played by Rondo Hatton. The Creeper is a monster who kills his victims by breaking their backs. You only see him in silhouette, or glimpse his shadow, or see his too-tight gloves on too-large hands, but in the final frames he is revealed. And it was sleepless nights for me for quite some time after that.

The ‘Queen of the Screamers’, Evelyn Ankers, appears in this film, having already appeared in 1942’s The Voice of Terror. Perhaps most memorably, she starred alongside Lon Chaney Jnr in The Wolf Man.

Ten films that might once have been on my list, and are still important to me (in no particular order):

There Will Be Blood

The King of Comedy

In 2003 I wrote a novel called Blonde on a Stick. The climax to that book occurs on the roof of the train shed at St Pancras, accessed via the desiccated rooms and corridors of the rotting Midland Grand Hotel. A chase scene beforehand had taken in the construction work occurring around what is now the gleaming Eurostar hub.

You could take a tour of the hotel back then, and this I did, soaking up the atmosphere of a magnificent building gone to seed; a sleeping giant. Every room was a riot of peeling paint and mildew, with dusty corpses of spiders and flies wadded in the corners. It was a building teeming with ghosts, a glorious setting for a story. My novel was not published until 2011, and in the intervening years the old Midland was refurbished on a spectacular scale and is now the St Pancras Renaissance. I worried for a long time over that facelift, and whether I should shift the end of my novel to a new locale in order to rescue the book from being dated, but surely such a fate is inevitable for all novels rooted in real towns and cities. Possibly this architectural dating isn’t as deleterious to a book’s fortunes than, say, the jargon of a specific period, Daddio, or references to how much certain things cost (you could buy a pint for thre’pence ha’penny and still have change left over for a powdered egg supper and a lift home on t’Hansom cab). My fear of including anything that might date the piece of fiction I’m working on is less to do with anchoring my characters in a specific era, and more to do with jolting the reader from the story. An early short of mine (my first published piece, actually) – Dirty Water – sold in 1987 to a small press publication called Dark Dreams, contains a reference to the British Gas privatisation adverts. Anybody remember Sid?

What do you think? Are there any books out there that failed to age well?

An utterly sumptuous film, beautiful to look at, brilliantly scripted, directed and acted, and containing everything you would want from a story: drama, thrills, intrigue, humour, tragedy and a deep, painful twist. Robert Towne’s screenplay is an object lesson in writing for the movies, but fair play to Roman Polanski for pressing for that dark, dark climax. I love Jerry Goldsmith’s shimmering score, the chemistry between Nicholson and Dunaway (her awkwardness, his almost disgusted curiosity in her), John Huston’s towering menace, and the fact that the story could have been done and dusted during Jake Gittes’ first visit to the Mulwray household, when he sees something gleaming in the pond (bad for glass) but is disturbed from his retrieval of it by Evelyn… Wonderful cinema.

I’m going to be cheeky and include all three films as one entry, mainly because whenever I watch the first, then I always end up watching the next two as well, so for me this is just one big story.

I love the look of the films, dark, grainy, infused with a sepia tint, and laden with menace. There are so many wonderful scenes in these films, many of them so tense it’s almost unbearable: the meeting in the restaurant where Michael Corleone (Al Pacino) leaves behind his life as an American hero at the expense of drug lord Virgil Sollozzo and corrupt police Captain McCluskey. Vito Corleone (Robert De Niro)’s scorpion dance with dandified extortionist Don Fanucci in the sequel. The final scene in The Godfather III when Michael Corleone is stalked at the theatre. Object lessons in pacing.

The films are shot through with marvellous performances from Pacino, James Caan, De Niro, Marlon Brando, John Cazale and Robert Duvall. A woman’s world this is not, but Talia Shire has a few powerful cameos. This is yet another Coppola release that charts the long-term destruction of a human soul. Beautiful and brutal in equal measure. Sublime film-making. Watch out for those oranges…

Mihai Adascalitei interviews me for Revista de Suspans. There is also a story, Slitten Gorge, and another outing for my recent blog post Doorstep Horror. The site is in Romanian, but there are English translations to be found. Check the links to the right of the page.

I loved the rash of paranoid thrillers that came out in the 1970s, particularly The Parallax View, All the President’s Men, Three Days of the Condor and The Conversation. Sandwiched between the first two Godfather films and Apocalypse Now, this was Francis Ford Coppola’s ‘quiet’ project, but it was no less gripping for that. Prescient too, in the way it warned of a society in which every movement, every conversation, every action on a computer can be tracked and traced.

Harry Caul, a professional ‘bugger’, complete with grubby flasher mac, is commissioned by a shadowy client to record a couple as they prowl around a busy park one lunchtime. It’s no easy job. The two are furtive, suspicious, clearly trying to keep their conversation private. Caul’s genius is in being able to cover every angle, no matter where they might decide to go. He’s got supersensitive microphones on roofs, and a bunch of employees on the ground, some so skilled they can record their quarry while walking in front of them. The only problem is that the mics pick up all the ambient noise too, causing much of it to be unintelligible. The way Caul feels his way to their words through the static, using his state-of-the-art tape decks, is an engrossing sight, especially when he uncovers more than he bargained for.

Gene Hackman is brilliant as the socially awkward, intensely private Caul who, like Martin Sheen a couple of years later, endures a shattering descent into his own heart of darkness.