One of a handful of films that caused my heart to beat so hard while I was watching it that I thought it would, um, burst right out of my chest. Utterly nerve-shredding. It was our first real view of space as being anything other than pristine, sterile. Miners work out here: foul-mouthed grease monkeys trying to line their pockets with green on groaning old spaceships held together with spit and prayer. Dragged prematurely out of hypersleep by the ship’s computer, the crew of the Nostromo must investigate an alien signal, a possible SOS. After the volunteers have left, the signal is decoded. Not an SOS after all. A warning. So begins the whittling down of the crew by arguably the most frightening of all cinematic monsters, thanks to the warped vision of HR Giger.

The cast – Yaphet Kotto, Harry Dean Stanton, Ian Holm,  John Hurt, Tom Skerritt, Veronica Cartwright and Sigourney Weaver – are uniformly excellent. I love the ad lib feel to the script and the fact that the monster is only glimpsed, a powerful tactic the sequels, though good, eschew. The brilliant, skeletal score (Jerry Goldsmith again) recalls the ribs of the ancient spaceship discovered on that desolate planet we would eventually come to know as LV-426. Nothing about the music, or the dissonant, echoing rattles within it, fills us with optimism. It is a bleak film, but it is stylish, intelligent and thrilling. The same words could be used to describe Prometheus – Ridley Scott’s belated return to the Alien mythos – but that film contains an absence of simplicity that Alien boasts.

As interesting as the director’s cut is in presenting us with Dallas’ grisly fate, it exerts a considerable brake on the pace of the film. I’d stick with the original release. 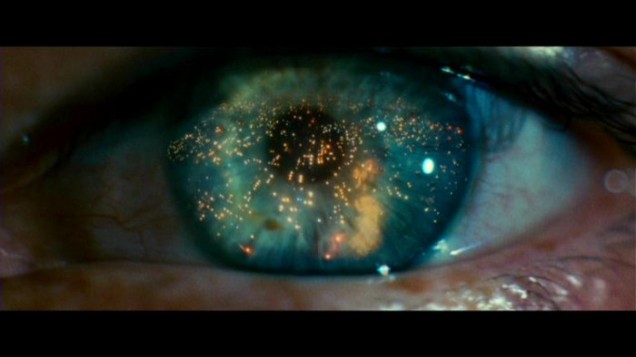 Forget the cliché-ridden voiceover that sounded as if it was phoned in by Harrison Ford. Forget too the happy ending with its bolted-on footage from The Shining. Go for the Director’s Cut. Lean, moody, brutal and brilliant. SF-noir at its most seductive: grimily gorgeous, with a match-made-in-heaven score by Vangelis. I remember being too young to see this at the cinema when it was on at the ABC in Warrington, but I was smitted by the poster (Han/Indy was in it!) and stared at it every time we drove past, desperate to know what the film was about. Quite how it wasn’t a massive hit from day one perplexes me. Maybe early 80s Britain, bruised and battered after the riots and a pervasive mistrust of the police, wasn’t ready for that kind of reflective vision. Not so much futuristic as right here, right now, or at least a glimpse at the shape of things to come.

In space… nobody can do proper press-ups

I’ve been a fan of the Alien films since I was maybe 12 years old, when I was way too young to see it (and, indeed, I didn’t actually get to see the first film until I was around 15) but I’d heard a lot about it, and knew it was my kind of thing. I’m retrospectively disappointed that I knew about the chest-bursting scene long before I watched it (ditto the floating head in Jaws… you take too long to see a touchstone film like that and your mates will let you know what happens whether you want to know or not), and I’m keen to show Alien to my eldest son Ethan before the surprise is spoilt for him too. As for the sequels, well, I loved them as well. All of them, even Alien 3 and Resurrection. I loved the mainly British cast of 3 (Pete Postlethwaite, fellow Warringtonian!) and the Fincher-dark of it; and the conceit of Resurrection. Aliens is one of the greatest horror thriller movies of all time.

I really wanted to like this film. I love Ridley Scott. Alien and Blade Runner are both in my top ten films of all time. I liked Hannibal and Black Hawk Down. But I’m sorry to say that I found Prometheus underwhelming, for a number of reasons.

It’s a film that bears comparison with Alien, as it retains a number of common elements. We have the synthetic David (the excellent Michael Fassbender), with a HAL-calm voice and a creepy habit of watching crew members’ dreams. In Elizabeth Shaw (Noomi Rapace) we have Ripley-lite (she even strips off down to her underwear – who’d have thought that bra and knickers of the future would be little more than strips of bandage? – before undergoing an emergency C-section, major surgery that really ought to put her on her back for a week. Mothers everywhere, I’m sure, were snorting at Noomi’s ability to go tear-arsing off through the ship’s corridors as soon as ‘baby’ was ‘born’). In Captain Janek (Idris Elba) we have baseball cap-wearing skipper who relaxes with a glass of Scotch and Stephen Stills’ old accordion, which allows the awkward elbowing-in of a reference to the Stills’ song, ‘Love the One You’re With’. This comes on the heels of one of a sequence of unlikely moments in the film where ice-cold corporate beak, Meredith Vickers (Charlize Theron), decides to prove she isn’t a robot by having sex with him. Yeah, right.

Other parallels include set pieces such as Prometheus entering the moon’s atmosphere for a landing that evokes the grandiose, elegiac approach of the Nostromo; Rapace, in extremis, arguing the toss with a CPU when she’s trying to programme her DIY abortion (recalling Sigourney Weaver’s plea to Mother to abort the self-destruct process in Alien); Charlie Holloway (Logan Marshall-Green) in the doomed John Hurt role, playing host to something horrid incubating in his guts and lots of shaky camera footage relayed back to the Prometheus crew.

One of the most iconic scenes from Alien was the discovery of the space jockey fossilised into his saddle, ribcage destroyed, splintered ends bent outward from an ancient encounter with the xenomorph. It was an awesome scene in the true sense of the word. There was an epic mystery there, a sense of fear and wonder relating to a catastrophic incident lost to time. Prometheus explained it away, and now we know that the weirdly beautiful space jockey look was actually armour that concealed a bunch of pale, bald guys.

It is gorgeous to look at, and its moments of body horror are utterly terrifying, but it’s all a bit of a mess, structurally and narratively. I’m not sure what was going on, only that it had something to do with how these aliens created us. However, there seemed to be more questions than answers by the end, including: WTF is it with the pan pipes ignition key? And how did the decapitated David’s lovely Peter O’Toole locks remain so tidy after the alien spaceship crashed and rocked and rolled all over the shop? Acting-wise, I was convinced only by Elba and Fassbender. Another distraction for me was Guy Pearce. As with Theron, I’m a great admirer, but did he even need to be in this film? The obvious CGI make-up hangs off him in great, wrinkly wattles, but wouldn’t it have been easier to just cast an ageing actor? The aliens lacked the raw, freakish terror of Alien‘s jaw-pistoning phallus (they just looked like flower-headed snakes and an octopus, ho-hum) and when David asks Elizabeth is she’s really sure she wants to give up the chance to go home rather than chase the threat to its source, I was as skeptical as he was. I wish it had all remained a mystery.

And that Charlize Theron had been taught how to do proper press-ups.